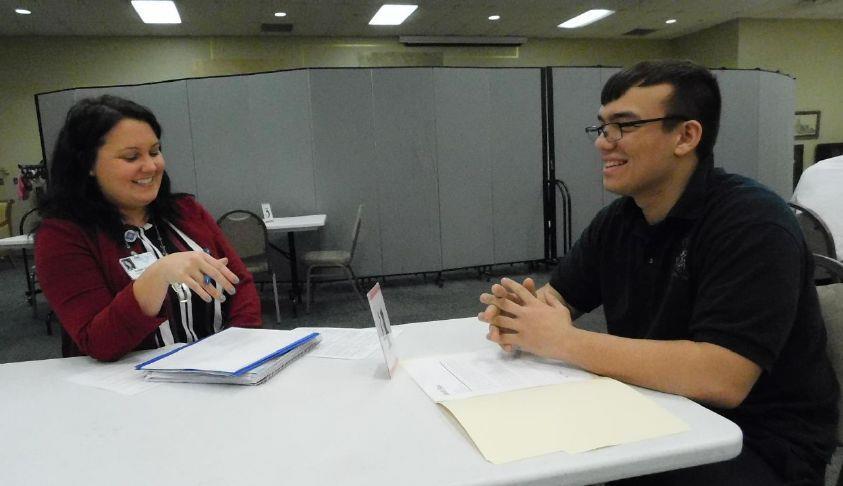 Seniors learn about 'Life Beyond These Walls'

NORWALK — Griffin Schwan admitted he was "really nervous" before his mock interview Tuesday.

But the St. Paul High School senior said he knows "not everybody gets a chance to do this," so he was grateful for the opportunity.

Seniors participated in the annual "Beyond These Walls" educational event Tuesday where they participated in mock job interviews and learned about personal safety and the difference between good debt and bad debt.

Schwan said his father, Pat, who is a civil engineer in Mansfield who conducts many interviews, told him it's important to be calm and "be yourself" during an interview.

"The ones who are most successful do that," he said.

Todd Barber, from Civista Bank, recommended students pay off their credit card bill every month and and only make purchases they can afford.

"Maintain that philosophy," he said.

Barber also told the students not to extend their credit beyond their income because, otherwise, they could get into financial trouble.

"Distance is always your friend," he said. "Don't be afraid to get distance between you and the perpetrator."

School counselor Betsy Pertner helped organize "Beyond These Walls." She said experiences such as the interviews are important for the seniors to have "before they get out in the real world" and they won't be as nervous during "that big interview."

In the financial presentation, Barber taught the students "what to stay away from right off the bat so they don't dig themselves into a hole," Pertner said. Also, while she said debt is addressed in school, it's especially important for teenagers to hear about it before they graduate.

Alumni have provided positive feedback about what they learned during the "Beyond These Walls" presentations.