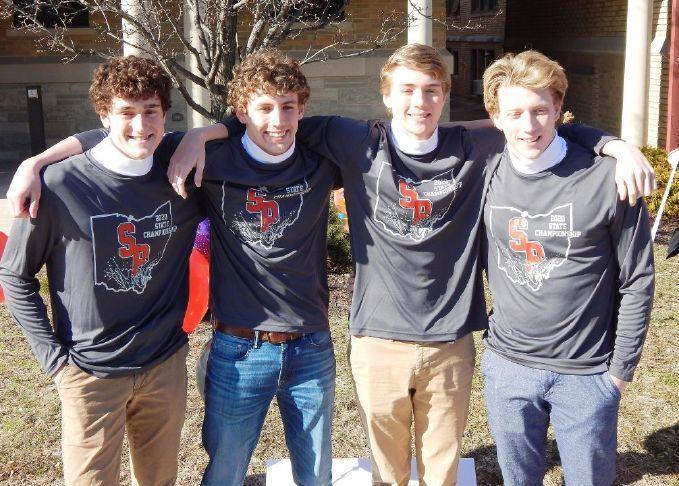 NORWALK — In the past, there would have been self-doubt.

But on the path to becoming the best swimmer in school history, St. Paul senior Jarret Schaffer was well past the questions.

The returning All-Ohioan (10th place) in the 100-yard breaststroke saw some of his best times in the event before the season ever began.

But then something happened: Schaffer didn’t get any faster.

“I was sitting around 1:04 during the first week of practice,” Schaffer said. “That was my best regular season time in my whole career. Once I saw that, I was immediately very excited for the season to start.”

But as the season went on, Schaffer didn’t get any faster.

“Had I been younger, I would have been freaking out that something was wrong, questioning my times,” he said. “But knowing what I know now, you’re not supposed to be breaking records in December.

“You’re supposed to be working hard, and you should be dog tired in those meets,” Schaffer added. “That is when I knew this was going to be a very good year for all of us.”

Schaffer had set the school mark last season in the 100 butterfly at the district (1:00.53) on his way to a 10th-place finish and All-Ohio honors at the 2019 state championships.

On Feb. 14 he swam the race in a new record time of 59.21 seconds, good for a third-place finish at the district and the No. 8 overall seed at state.

He swam the 50 freestyle in 22.31 seconds to place seventh — good for the state championships as the No. 22 time entering the event.

But the topper to the whole season and weekend was the 200-yard medley relay team. The quartet of Andrew Schaffer, Jarret’s younger brother, along with Ryan Hedrick, Gavin Moffit and Jarett swam the race in 1:41.0.

The eighth-place district finish was not only a new school record, but earned the relay the 19th-best time and a spot in Thursday’s championship preliminaries, scheduled for a 5 p.m. start.

Gabe Dauch had been the previous state qualifier from St. Paul prior to Jarret Schaffer. Now, the program under head coach Stacy Stoll has a state relay team and four individuals making the trip.

"We knew there was a lot of potential with our relays,” Stoll said. “The team two years ago had a lot of the same qualities from the same families, but we didn't make it anywhere near (state). But we knew if we focused in on the time and breaking the record, playing the numbers, that it was a good possibility.

“As the season progressed and having looked at the potential, we really pushed it,” she added. “But the biggest thing is the kids really worked hard to get there.”

The same swimmers from the 200 medley relay also took down a school record from 2014 with a time of 1:32.16 to place 11th at the district last week. However, the time missed the 24-team field for state by just .28 seconds.

But nonetheless, Stoll said there is a new reality for the St. Paul program and future and returning swimmers.
"The 200 free and the 400 free that almost got a new school record, those kids are all mostly coming back,” she said. “The only one moving on is our rock, Jarret.

“But the drive from these kids will be to continue to get better — because they've tasted it. And (Thursday), they get a real taste of this, which I think will be a driving force.”

Jarret Schaffer said the difference in feelings from 2019 to this season is evident in the relay.

“It’s an incredible experience, because swimming will always kind of be viewed as an individual sport,” he said. “But it’s not as fun that way. What makes swimming fun is being there with your teammates, or in this case my brother and two of my best friends.

“I couldn’t have asked for my senior year to end any other way,” Schaffer added. “It’s a great group of guys going, and I’m very excited for everyone.”

Last season, Schaffer was seeded 13th in the 100 breaststroke and moved up three spots. His goal is to swim in the ‘A’ final (1-through-8) after competing in the ‘B’ finals last season.

“The goal is to always drop time, but I’d certainly love to stay in the A finals and be on that podium,” he said. “It’s something I was just edged out from last year. I’m back this year, I’m a lot stronger I feel, and more experienced. I feel I have what it takes to get on the podium, and that’s what I’m aiming for.”

Stoll said seeing Jarret Schaffer finish his career in three vents is the best reward anyone within the program could ask for.

“He is someone who has worked and does everything he is told, and is a true leader for his team,” she said. “His determination, but his connection to reality. When the race is done, he's never mad or angry. He leaves it in the pool.

Meanwhile, Schaffer spoke Wednesday about the fitting end in front of him. When he was in grade school, he was encouraged by the Norwalk Stingrays Club coach at the Ernsthausen Recreation Center to give competitive swimming a shot.

The coach thought there was untapped potential in Schaffer, who 11 years ago was none the wiser. That coach was none other than Stoll.

“There is no other way it was meant to end,” Schaffer said. “My swimming career started with Coach Stoll, who gave me the base of swimming so long ago. And now we’re going to Canton one more time.

“This time we brought some family and friends with us, so hopefully those guys can also get back here next year as well,” he added. “It’s very poetic.”