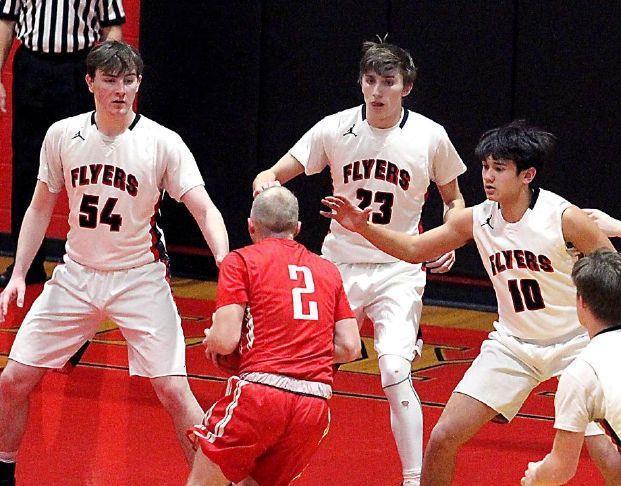 NORWALK — When St. Paul basketball coach Mike Smith got the ceremonial Gatorade bath, he was glad the cooler actually didn't contain any of the athletic drink.

“I’m feeling good, but thank God, it wasn’t Gatorade; it was just water," he said. "I told the guys earlier, ‘It was worth it.'"

St. Paul earned a share of the Firelands Conference championship with a 60-48 win Friday over Plymouth inside Fr. Harvey Keller Gymnasium at the St. Paul Convocation Center. The Flyers ended the regular season 14-8 and 12-2, which gave them their first league championship since the 1997-98 season.

“Obviously, I feel great. These guys right here were the only ones (who) could believe they could win," said Smith, who noted South Central and Western Reserve had "loaded teams."

“I’m real proud of these kids because you know, they came to play every night and went through a tough stretch recently — and we played a brutal, brutal schedule,” he said. “We could have felt sorry for ourselves, but they kept bringing it to practice and it’s very gratifying as a coach.

“It’s nice that we do it here at home and we want to carry this momentum into (the) tournament, but right now we just want to enjoy tonight.”

“I knew it was my last game on the home court and I had to give it my all, so I blocked everybody out,” said the son of Jacob and Alaina Konik.

Shepherd scored eight of the Flyers' 12 first-quarter points. The home team led 12-7 to end the quarter.

Most of Shepherd’s first-half points came from assists via junior Scotty Adelman, who had eight on the night to go with five rebounds.

“He had quite of few passes to me from (taking) the ball out of bounds. … We have pretty good chemistry as a team,” Shepherd said.

St. Paul went into the locker room up 27-19. The Flyers increased their speed in the second half and although Plymouth kept pace, St. Paul ended the third quarter with a 40-31 lead.

“I know we had some calls go against us, but we overcame those calls and powered through it for the Firelands Conference championship,” Shepherd said. “We put in a lot of hard work. We’ve been looking for this since (the) summer and it paid off as a team."

“We were getting pushed around on the boards,” he said. “I think in the first half they had 12 points on second-chance opportunities and that was kinda the ball game.

“We started three sophomores most of the year. We had a couple returning lettermen when the season started, but we really only had one player (who) had any varsity playing experience,” McKenzie added. “We never settled on a starting lineup. I have started 13 different starting lineups; I had rewarded guys from practice and got them in the next week."

Some of Plymouth's challenges this season was developing a shooter early.

“If we get a good summer in, we’ll be a different ball club next year. I will have three juniors (and) a couple seniors next year (who) now have 22 games under their belt. Zeth Goth is going to be a player for us. Clayton Miller started the year on jayvee (and) he ended up being one of my leading scorers."

“We won the games we needed to,” he said. “We held court at home against the top dogs and that’s (why) we’re sitting here tonight.

“We played a tough schedule and it wasn’t like we got blown out; we were in all those games. We had chances to win,” Smith added.

“You gotta keep persisting and when things don’t go your way, it shows what kind of person you are by how you handle that. You try to pick yourself back up. … We went through some difficult times and we kept telling ourselves, ‘Let’s not feel sorry for ourselves. Let’s keep grinding.’ It’s been a grind, but very well worth it.”

"He gave up varsity minutes (this season) so the JV team could keep playing," said McKenzie, who called him a "total team player."