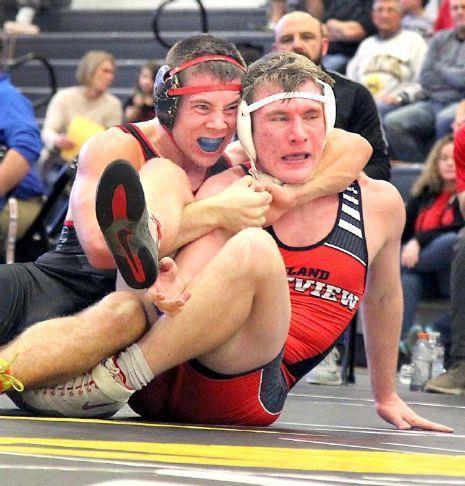 First-year coach Jesse Gross had a pair of No. 2-seeded wrestlers knock off the top seed in two separate finals on Saturday.

Then, his returning state placer capped the day with a second straight conference championship.

Sophomores Harley Stoll (106) and Aiden Naseman (120) joined senior Cam Caizzo (182) as individual FC champions for the Flyers. Ryan Gross (138) and Will Stieber (145) lost in the finals to place second.

“Overall, we’re pretty pleased with three champions and five finalists,” Gross said. “The big highlight was Thomas Pearce (at 160) taking third. He’s a second-year wrestler who came here today and gutted out two wins, which was huge. I’m real happy with our performance.”

“It feels good,” Stoll said. “I woke up today and knew I had to come beat the kid I lost to last year. It was redemption, and I had to get it.”

Naseman (31-13) needed 51 seconds to pin Mapleton’s Bryce Case, then was solid in a 9-0 major decision win over Plymouth’s Keith Tuttle.

“I’m glad I can represent our school and win a conference championship,” Naseman said. “All the work we put in together every day, it all adds up, and this is the result.

“I want to use this as a springboard, but need to take it one week at a time and focus on the next match and see what happens at the sectional,” he added. “State is obviously everyone’s goal, but all the focus is on next week.”

At 182, Caizzo (34-5) was quick to pin Mapleton’s Grady Kline (36 seconds) and Western’s Preston Ehrsberger (1:07). In the finals, he scored frequently to pick up a 22-7 technical fall win just before the third period expired against Crestview’s Garrett Hunt.

“It feels good because I knew I had good competition and it would be a challenge,” Caizzo said. “There is a lot of good wrestlers in my weight class, and I’ve faced Garrett before, he is a tough opponent.”

Gross graded his team’s effort as an A.

“We have a lot of fundamental and technique stuff to clean up, but our effort is there,” he said. “I don’t want us to get too hyped or too low for sectionals and districts coming up. But the way the way they wrestled today is a positive step.”